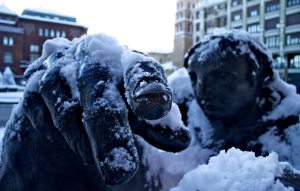 “Meantime … that’s when the mean men come.”
– my own definition, circa age 5

Seems we are living in the meantime.
Seems the mean men have come.
When a mother dies, trying to shield her children from gunfire,
And the children are killed, too.
It is the meantime.

When the mean men come to power
And bend that power to their own advantage
Leaving behind the families who struggle to make ends meet
And then claim they are serving the nation
It is the meantime.

When the mean men use their power
To abuse and then silence the women around them
Who take their dignity and threaten their life and livelihood, too
Sometimes taking that, as well,
It is the meantime.

When the mean men point their fingers and shout
Trying to distract us all from their abuses
Blaming anyone who looks different or seems powerless
For the outcomes their own system perpetuates
It is the meantime.

When the mean men are ready to do whatever it takes
To preserve their positions of privilege – of wealth and of power
Building walls and buying guns, hoping to keep themselves secure
Not understanding that the imbalance and separation is their greatest risk
It is the meantime.

When white men and women (like myself)
Wear privilege like underarmour
So tight that it seems to us like our ‘natural’ skin
We think it hides our flaws beneath its smooth whiteness
It is the meantime.

I am complicit in the coming of the meantime.
The mean men don’t have to be men (though they often are)
They don’t have to be white (though it makes it more likely)
We just have to be small, stingy, self-absorbed –
Another definition of mean.

Can I also be complicit in changing the times?
Oh, I do hope so.
And the first step must be outside my own walls.
It is time to leave the meantime behind
But how?

It cannot be done through power and privilege
All my usual tools do not avail
I will not figure it out on my own
My head is too small and my eyes too blind
Will you take my hand and help me not be mean?

‘Tis the gift to be simple, ’tis the gift to be free
‘Tis the gift to come down where we ought to be,
And when we find ourselves in the place just right,
‘Twill be in the valley of love and delight.
When true simplicity is gained,
To bow and to bend we shan’t be ashamed,
To turn, turn will be our delight,
Till by turning, turning we come ’round right.
– Joseph Brackett (sung by Jewel)

Too often I forget that you are there
That you already surround and embrace me
That turning, turning,
Places me in your arms, in your quiet
In your delight – and in mine.

Bring me to that turning
Help me touch the quiet
Help me to embrace your simple gifts
Of love and delight
Of connection and deep peace.

I quiet my soul
I turn and lean in just the tiniest bit
And find I am resting my head upon your chest
And feel you wrap your holy spirit ’round me
This … this is home.